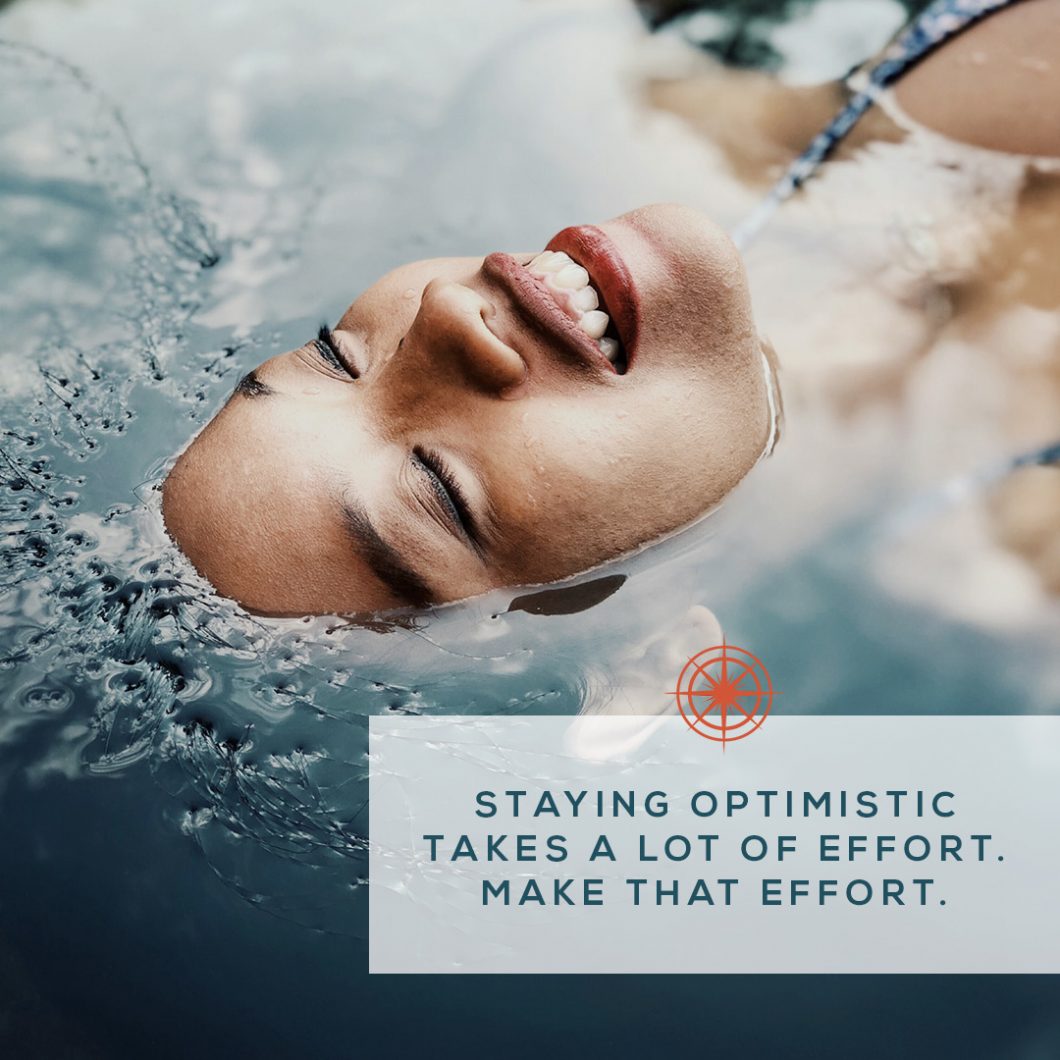 No, didn’t think so.

Most change-makers, successful leaders and other people who have things going for them in life, usually have a burning sense of optimism within them. They’re fuelled by positive energy, which drives them onwards and upwards, through difficult times and beyond.

So when people who are generally a bit negative (grandparents, teachers, teenagers, some of your close friends, taxi drivers and other doomsday preachers) say that you’re a fool for being optimistic, that you need to take precautions by preparing for the worst – don’t ever let them kill your positive energy. They will often make you feel as if you’re a bit naïve for believing in the future, a bit like a little girl with rose-tinted glasses in la-la land. You’re not. They’re actually the losers and you can wave them good bye.

Bringing out positive energy during pandemics and other difficult times is of course hard. It’s so difficult to see what the positive outcome will be at the moment, many people are feeling very disillusioned, anxious and even depressed about the future. If you read the papers and social media posts at the moment, it’s all very very disheartening, the atmosphere is loaded with fear, negativity and also accusations.

There’s a harmful amount of twisted opinions, based on guesswork and blatant conspiracy theories. There’s a lot of people who are so worried, their outcry comes out in the form of sharing even more negative stuff – they can only see what they fear and keep reading only the worst case scenario predictions, then they repost those, fulling not only their own worries but their friends’ too, completely blind to any positive statistics, change, or even hope.

The only way we are going to turn anything around, is by staying optimistic. We need to believe it’s possible to create change, otherwise we might as well pack it all in immediately. But it’s hard, it takes effort to charge your mind in a positive way, it doesn’t always just come, you need to work on it. Being negative is easy, you don’t have to do anything, it’s a lazy energy that just draws you down instead of pushing forward.

There’s of course a difference in being precautious and being negative, we always need to be mindful of risks and consequences, but unless you’re the finance director of a sinking ship, a bit of positivity usually doesn’t hurt. You don’t need to walk around on a pink cloud every day, you just need to believe that we can create change towards a better future, and that we’re all an active important part of that change.

You also don’t have to accept everything and believe it’s all good just because you’re positive. The biggest change-makers have always always believed it’s possible to create change, how else would Nelson Mandela have survived 27 years in prison and come out as the first black head of state?

Being an optimist is usually driven by looking ahead, at solutions, at the bigger picture, and having a grounded stance of yourself. It takes a creative mind to create change, it takes courage and sometimes innovative thinking.

Pessimists often look backwards, analysing irrelevant issues, sometimes not even connected to the problem and often looks for people to blame. Blaming other people for situations is an easy way to relieve yourself from guilt, which can be common in people who feel negative and pessimistic. The guilt of doing nothing.

Negativity can seriously impact your health and wellbeing and draws you down even further into depressive feelings.

Optimism and pessimism spreads. Between people. People’s words, people’s actions and what people share. Positive feelings boost people. Negative feelings bring people down. This is why negativity is also selfish and destructive not only for you, but for other people too.

So if you feel a bit guilty of spreading negativity or maybe you just find it hard to stay optimistic about things at the moment, it’s time to start working harder on your mindset. Yes, I am going to tell you to be more grateful for the things you have, it’s really really important. Every day you need to treasure the little things in life if you don’t have the big things you think you need, because it’s usually the little things that ARE life. Look at yourself in the mirror and say “I’m still here, I’ve managed so far, so I will manage tomorrow too, now let’s make some new plans”. Look at all the people in the world who push through, every day, through hardship, poverty, hunger and disease – they still manage to smile because they still believe there will be a better tomorrow.

Read inspiring books, listen to uplifting music, hang out with people who make you happy, who charge you up with positive vibes. Spread the optimism and never ever think that you’re the naïve one – you’re the winner in all this.

Talking to my friend Viv Lambert (Lambert’s White Dover Release), she says “The energy is different, the negative feelings are heavy, backwards, stubborn and tired, the positive energy is light, uplifting and…. Positive! You can even transfer that energy to the home, by clearing out heavy areas that just create weight and feel dusty and irrelevant for your progression. It has an instant effect on your spirits, it opens up for positive energy flow in the room.”

And finally, it’s time to be more un-selfish. What right do you have to spread your negativity anyway? What good will it ever do to someone else?

By remaining positive and optimistic, you’ll be a leader of a brighter future, someone to look up to and follow with joy, instead of someone who drags everyone down into the pit of doom.

And join the Eye Storm Facebook group for women for free here:

To find more advice from Viv Lambert on how to create positive energy in your home:
https://www.facebook.com/My-Feng-Shui-Coach-146049065444140/